“I’m not a French chef,” says Marseilles born George Mavrothalassitis, “I’m a Frenchman who’s a chef.” This is not self modesty but a succinct definition of what has made his Honolulu venue, Chef Mavro, one of only two Mobil Five Diamond restaurants in the state of Hawaii. As a founding chef of the Hawaii Regional Cuisine movement, it is not a stretch for chef Mavrothalassitis to create menus influenced by Hawaii’s pan Asian products and his own eclectic imagination.

Growing up in the ancient Mediterranean port of Marseilles, with a Greek father and an Italian mother, meant that a multicultural population and the freshest of ingredients were taken for granted. His grandfather had a farm in Provence where he’d spend much summer time in his young years. This had a great influence on his decision to become a chef, but parental persuasion diverted George’s attention to a university degree in engineering. After a half dozen successful years as a mechanical engineer he couldn’t kick the urge and started working in restaurants.

A chef of nouvelle cuisine, never trained in French classical cooking, George’s style was towards small-portioned dishes, light in texture yet complex in flavor, no roux, maybe a seasoned foam, perhaps a little stock as sauce. “It was molecular gastronomy before the term became something new.” Arriving in Los Angeles in the early 1980s, George discovered patrons uninterested in nouvelle cuisine. A young Wolfgang Puck advised George to adapt to American tastes. Chef Puck was then working on his soon-to-be famous line of pizzas.

George says that a stint in Denver exposed him to American tastes and to people who enjoyed an inventive style. Accepting a position as chef of Le Mer at the luxurious Halekulani Hotel in Waikiki, chef Mavrothalassitis relocated to Honolulu in 1988. He quickly saw the similarities between Holnolulu and Marseilles – multicultural mix, climate, meats, produce, seafood and fish.

Yet networking with fellow chefs, they shared boredom with the same international cuisine most restaurant menus offered. Honolulu hotel resorts imported 95% of all foodstuffs from the mainland and featured what chef Mavrothalassitis calls, “ceasar salad and chardonnay” blandness. Yet in predominately Asian ethnic neighborhoods small restaurants were serving food with vibrant flavors. Their owners and cooks were buying from local farmers and fishermen.

For fine dining restaurants, what was farmed locally was limited, so George Mavrothalassitis, along with eleven fellow chefs, founded the Hawaii Regional Cuisine movement in 1991 to encourage local farmers to diversify crops because the chefs would create the market for their products. That if you build it they will come philosophy continues to succeed for all concerned. The HRC’s Hawaii Culinary Education Foundation and the Kamehameha Schools Hawaiian culture and farmer programs share similar visions.

Hawaii, not Hawaiian, is an essential word choice. Traditional Hawaiian dishes are distinct from the many brought in by immigration over the past 150 years. Hawaii Regional Cuisine highlights the cultural diversity of the islands. “It’s not a style of cooking,” insists Chef Mavrothalassitis, “it’s a philosophy.” It’s a commitment as well to use local products from mauka (mountain) to mokoi (sea).

Quality control and consistency are always an issue when growing new produce for commercial use. At Chef Mavro, George Mavrothalassitis limits his inventory, has no freezer and orders food products daily. Since reservations are essential, and there are only three variations of the set menu, the kitchen can pinpoint their ingredient needs in advance.

Opening Chef Mavro in 1998, George Mavrothalassitis says his own style is heavily influenced by Japanese cuisine in creating a western, pan Asian mix with 85% of the menu locally sourced. Allan Ducasse was an early mentor influencing chef Mavrothalassitis’ decision to specifically pair wines with individual dishes. Wine as an essential flavor experience is a hallmark of Chef Mavro. Blind wine tastings are held among staff and consultants when 30 wines, each bottle covered by a brown paper bag, are narrowed down to the ones that work with each specific dish on the seasonal menu.

The resulting choices are as varied as Shirakabe Gura-Sho Chiku Bai sparkling sake served with a glistening sushi inspired ahi and aleppo pepper poke to Blandy’s 15 year Malmsey madiera for a Big Island inspired dessert of Hamakua coast Madre Chocolate. Maculan Estate 2011 Dinderello with its rich golden color and semi dry honey notes may seem more sensible with fresh fruit yet it equally complimented the buttery flavors of foie gras. The richness of this most French of appetizers was mitigated by a touch of bitter chopped Hawaii chocolate nibs and mole sauce.

The Hawaii Regional Cuisine movement has spread to small cafes, coffee shops, farmers markets and even the KTA supermarket chain, which carries many local products from an expanding number of farms. At a time when some of his fellow twelve chefs are retired, George Mavrothalassitis is the hands-on executive chef of his own restaurant. And like the philosophy of if you build it they will come, visitors worldwide keep Chef Mavro constantly creating. George Mavrothalassitis, and Hawaii, couldn’t be happier.

To read the Luxe Beat Magazine version of this article click on the title Chef Mavro is Five Diamond Hawaii Regional Cuisine. 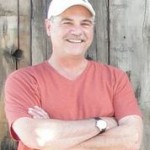 As a chef, historian, travel writer and photographer Marc seeks out connections among places, people, their activities and what they eat that tell the stories of a region and a culture whether that be in the remote Andes Mountains or the streets of Philadelphia. He serves on the Board of Directors of the International Food, Wine and Travel Writers Association, and is a member of the American Culinary Federation and the International Travel Writers Alliance. Marc has lived in Puerto Rico and Nova Scotia and travels extensively and writes about southern South America, Southeast Asia, Europe, North America and southern Africa. Publications include his travel web site on Argentina (www.travel-with-pen-and-palate-argentina.com) and articles covering a diverse range of countries, cultures and cuisines at www.travelpenandpalate.com, Examiner.com (http://www.examiner.com/user-penandpalate) and Suite101.com (http://suite101.com/marc-d-entremont). In January 2013, Marc won First Place in the IFWTWA-Infinity Publishing competition for travel writing. Marc lives in Philadelphia, when he is home.

7 Tips to Fight Back Against Anxiety

You have made too many requests recently. Developer accounts are limited to 500 requests over a 24 hour period (250 requests available every 12 hours). Please upgrade to a paid plan if you need more requests.