There is a nip in the air and leaves are changing; fall is officially upon us! With this fantastic season comes some delightful traditions: pumpkin patches, corn mazes, festivals and costumes. What you may not typically think of when you think “fall” is Rock City, Georgia. More specifically, Rocktoberfest.

Rock City sits on top of Lookout Mountain, which straddles the Tennessee/Georgia border. On a normal day, you can walk through the rock structures, struggle through narrow spaces like “Needle’s Eye” and “Fat Man’s Squeeze”, find some gnomes hanging out in their village, and wander through the Fairyland Caverns, which bring fairytales to life. From one peak, you can see seven states at once.

There’s a flag on the landing for each state represented: Tennessee, Georgia, Alabama, the Carolinas, Virginia and Kentucky.

You can also pose for pictures in front of a waterfall coming out of Lovers’ Leap, a cliff where a Native American couple met their demise. After telling the young woman and man they couldn’t be together, the tribe threw the man to his death. Not wanting to live without him, the woman jumped after him. Rock City also has a swinging bridge, a deer park and several restaurants and shops.

However, Rocktoberfest is something special. The grounds are decorated with fall classics like pumpkins and garlands of leaves. German music plays through the overhead sound system while you traverse around. Characters in full costume, such as the Troll King, interact with children and tell stories of German lore. The restaurants serve traditional German meals and beer; even polka lessons are available! All of these events are in honor of Rock City’s founders, German immigrants Freida Utermoehlen Carter and her husband, Garnet Carter.

One bar was offering free wine samples (up to five!) so of course, I partook. The wines were from Georgia Winery, a local vineyard near Lookout Mountain. I tasted the Chattanooga Blush, a sweet wine that was named “Best of Blush” twice in the Wines of the South Competition. It was delightful! I also sampled Georgia on My Mind, a white wine with hints of peaches. It is the most awarded wine for Georgia Winery. This was quite tasty as well.

Rocktoberfest runs every weekend through October, but if you can’t make it, Rock City hosts many other events throughout the year. November through January marks their holiday season and includes the Enchanted Garden of Lights; in March, visit Shamrock City for an Irish flair (and more beer!); and all through the summer, they put on Summer Music Weekends.

Whether you’re on a first date, bringing the whole family, or have been married for fifty years, there’s something at Rock City for everyone! Take my advice and wear comfortable walking shoes during your visit. 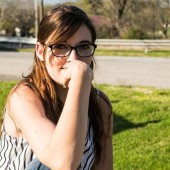