Most New Yorkers learned to love Marcel Breuer’s imposing concrete fortress on Madison Avenue, but it’s hard not to swoon outright over Renzo Piano’s new home for the Whitney Museum of American Art at 99 Gansevoort Street and the downtown end of the High Line. Floor to ceiling glass walls flood galleries with natural light and allow artworks big and small to shine.

Whitney staffers are at least as excited as visitors, as their 21st century home provides virtually twice the gallery space of the old Whitney as well as on-site work space for curators and conservators, a library open (by appointment) to the public, a 170-seat theater plus the flexible fifth floor Kaufman Gallery suitable for film, video, and performance art.

At the opening ceremonies, Piano described the wide-open lobby as a “piazza,” where visitors enter a “world of art and freedom.” This idea of the museum as place of convergence jibes with Renzo Piano’s philosophy of architecture: “One of the most important reasons for the architect’s work, which keeps us going and gives us the strength to continue our projects, is the idea of not creating buildings indifferent to the city, but meeting places, where people will get together and share their values.”

One of the first artworks that catches the eye is a round light-up version of EAT by Robert Indiana which hangs in the ground-floor Danny Meyer restaurant coyly dubbed Untitled; hanging over the restaurant’s sleek 10-seat lunch counter, it is a sly nod to the brevity of old-time diner neons.

Site-specific pieces such Richard Artschwager’s designs for the museum four elevators, entitled Six in Four, transform the visitor experience from the standard look-but-don’t-touch to something more immediate. playful and innovative. The four different elevator cabs play on subjects that Artschwager returned to repeatedly before his death in 2013–door, window, table, basket, mirror, and rug. When the museum is closed, the elevators will remain open on the ground floor, displaying their interiors to passersby.

The central interior staircase which runs from the lower level to the fifth floor is a notable contrast to the dark, claustrophobic stair in the Madison Avenue building: steel grate  stairs wind around a central opening in which is displayed Felix Gonzalez-Torres adaptable sculpture composed of twelve strands of light bulbs.

Just off the lobby is a room devoted to the museum’s roots of a hundred years ago, when Gertrude Vanderbilt Whitney opened the Whitney Studio Club in her Greenwich Village digs at 8 West 8th Street. An accomplished sculptor in her own right, Whitney championed the works of the much-maligned Ashcan School and gritty works by Edward Hopper, John Sloan, George Luks et al formed the core of the museum early collection.

With nearly double the gallery space of its old building, the Whitney opens its new home with  “America is Hard to See,” an expansive exhibition drawn almost entirely from its own holdings that brings many neglected works out of storage and presents them alongside some of the museum’s iconic pieces.

The new Whitney’s first exhibition is titled America is Hard to See.

Chief Curator Donna DeSalvo explained: “The title America Is Hard to See points to the impossibility of offering a tidy picture of this country, its culture and by extension, its art. The exhibition takes up this challenge through the lens of the Whitney’s collection, re-examining well-known art historical tropes, proposing new narratives, and even expanding the definition of who counts as an American artist. We did not conceive of this exhibition as a comprehensive survey, but rather as a sequence of provocative thematic chapters that taken together reflect on American art history from the vantage point of today.”

The exhibit begins on the eighth floor, bringing visitors up to one of the most dazzling new spaces in the city. Adjustable skylights control the illumination on familiar pieces by Marsden Hartley, Georgia O’Keeffe, and other from 1910-1940. Brooklyn Bridge by Joseph Stella and Smokestacks by Elsie Griggs look especially right in this gallery which open onto a spectacular terrace that offers sweeping views of the New York skyline, from the Empire State building to the Freedom Tower, with the High Line and the quirky Meatpacking District below. With its own set of  ventilation shafts fashioned to look like smoke stacks and its steel grate staircase, this outdoor space is an amazing fire-escape-cum gallery for sculpture. Joel Shapiro’s cast-bronze stick-figure is even more appealing here than it was set in front of the great purple-blue canvas Swimmer by Robert Moskowitz.

The exhibit continues on floors seven, six, and five with works from 1965 to the present.

Beyond spacious galleries and wonderful new spaces for theater, educations, conservation, restaurants and so on, perhaps the Whitney just needs to be downtown (again). Of course, many of the artists and galleries that museum press releases cite as neighbors have actually been priced out of this area in transition, just as the former meatpacking stalls are taken over by chic clothing boutiques. But time will tell. I look forward to seeing the first Biennial in this building in 2017. In the old Whitney, I often felt that some of the more avant-garde pieces were trying a little too hard to shock an Upper East Side cocktail party crowd. But here, where Chelsea and Greenwich Village meet the Hudson River, Renzo Piano’s vision of a museum as a laboratory for artists of all kinds really seems possible, a dynamic new idea of what a museum can be.

Renzo Piano’s new home for the Whitney is perhaps not as singular as, say, Frank Lloyd Wright’s Guggenheim Museum on Fifth Avenue, but it is certainly far more practical. It is expandable and adaptable to the existing art collection and possible future happenings and installations.  It is welcoming and user-friendly to staff, archivists, students and casual museum-goers. Like American art itself, the Whitney is dynamic and expansive, inspirational and aspirational and truly offers us a new way of seeing our city and our art.

Get Ready to Be Mesmerized by Monument Valley
Share: 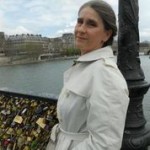 Her international travels started with a sunburn in Antigua at the age of two. Since then Nina has studied in Paris, climbed the Statue of Liberty, played golf in Scotland, danced in the streets of Rio de Janeiro, shot craps in Vegas, and shopped the casbah of Tangiers. A member of SATW, IFWTWA, and the MGWA, Nina often writes about golf and sports-related travel, spas, art, wine, and restaurants.

“Life Without Art is like Dinner Without Wine. Why Bother?”