Georg Riedel and Angelo Gaja: An Interview with Visionaries

Every wine enthusiast is familiar with Riedel Glass and lovers of fine Italian wines know Gaja Winery. I recently attended a wine tasting hosted by these two industry greats and had an opportunity to sit down with the owners of both companies–Georg Riedel and Angelo Gaja. The once-in-a-lifetime experience was pure pleasure as I listened to the stories of these two visionaries.

When I met the two men–the calm, mild-mannered Austrian Riedel and the energetic, ever-moving Italian Gaja–I immediately felt as if I was the center of their universe. The two had an easy banter back and forth that comes from years of working together and a sense of mutual respect, but they also wanted to make certain I understood every detail. Both men smiled easily and had a self-assured attitude without making me feel inferior. That is a rare trait that has served both men well as they grew their family legacies to record proportions.

Both the Riedel and Gaja families go back centuries, refining and improving their crafts over the years. The first Riedel glass dates back to 1673, when one one of the Riedel ancestors from Bohemia, a glass trader, carried glass on his back to Spain and Portugal. Throughout the centuries, the Riedel family continued to make glass, despite incredible challenges as Europe underwent political turmoil and a series of wars. By the 1800’s, Riedel was known far and wide for its fine glass beads. The family had amassed a fortune, which disappeared overnight during World War II. At one point during the tumultuous 1950’s, both Walter and Claus Riedel (Georg’s grandfather and father) were imprisoned by the Soviets and the Czechs. Yet, not even war and prisons could stop the Riedels. Claus actually jumped from a moving train crossing the Brenner Pass and made his way to freedom in Austria. There, he was taken in by another famous glass family, the Swarovskis.

Once Claus and his father were reunited, they were able to press ahead with plans to restore their family legacy. Unknown to Georg Riedel and Angelo Gaja at the time, it turns out that 1961 was a pivotal year in both companies. Claus Riedel, with a loan from Swarovski, bought a glass factory in Austria and in 1961 introduced the first blown glass stemware for which the company is now famous. Georg didn’t join the company until 1973, but he continues to strive to create the kind of company his ancestors would be proud of. More importantly, one he can pass along to future generations of Riedels. The idea that specific glasses can be designed for specific wines is one Riedel has perfected and is what makes the company famous today. “It’s important to create a wine experience,” explains Riedel about his glasses.

It was also 1961 when Angelo Gaja joined the company his ancestors had built. Gaja Winery was founded in 1859 and was a rare for the time because it was a small estate winery, unlike most Italian wineries. The Piedmont region of Italy, home to the original Gaja vineyards, is thought by some to be one of the most important growing regions in the world. “Piedmont is special,” explains Gaja. And making wine? “It’s in my DNA,” he says with a laugh.

While winemaking might be in his DNA, Gaja has worked long and hard to create a world-class wine. He says he learned everything from his father Giovanni Gaja and grandmother Clotilde Rey. Clotilde was a French school teacher when she met the first Angelo Gaja and married him. The young woman threw herself into the winery and learned everything possible about the industry. “My father was like a maestro teaching me everything,” explains Gaja, his hands moving as if he himself is a maestro conducting an orchestra. The key ingredient that no one could teach, however, is passion and Gaja has plenty of that. “You must have passion in what you do or it becomes too heavy,” he explains.

Gaja began his official wine education at age 14, when he attended winemaking school in his hometown of Alba. He would spend weekends at the winery, learning from his father and grandmother. His grandmother was uneasy with the young boy tasting wines, but his father quickly reassured her. “My father told her that he who knows how to drink wine knows how to live.” Gaja spent six years at the wine school and later attended university to receive a degree in economics while also working at the winery. When his beloved grandmother passed away in 1961, Angelo Gaja joined his father Giovanni in the business. In the ensuing years, he introduced new wines, added parcels of land in Tuscany to the family’s holdings and adapted new methods for creating the best wines.

When Gaja first started in the business, there was definitely an old-school mentality in the Italian wine industry. He found it difficult to introduce new methods and new wines. Gradually, he was able to make progress, eventually introducing a Chardonnay called Gaia Rey, named for his daughter (Gaia) and his grandmother (Rey). The winery continues to be most proud of its Barbaresco wine. “There are opulent wines; rich, robust wines in the world,” he explains, “but Gaja makes elegant wines.”

Gaja, who now has his two daughters working in the business with him and a son he hopes will someday join them, says his grandmother taught him the four steps to being a skilled artisan:

Transmitting that knowledge is Gaja’s passion today. “I hope all my children and the future generations will carry on,” explains Gaja. “Our most important heritage is the vineyards. I hope to transfer that to the new generation. You can’t force them to follow. You set examples and hope they will follow. Above all, you must show them the passion.” He pauses briefly, seeming to search for just the right word. “Passion is like a windshield wiper. It doesn’t stop the rain, but it makes it possible for you to continue.”

All of this passion for wine and glass might not make sense to everyone, but Riedel and Gaja hope that by reaching out to the public, they can help others understand why the glass really does matter. Laughing, Gaja leans in toward me just before we finished the interview. “Wine is often abused,” he says. I nod, bracing myself for some type of lecture. “It’s served at the wrong temperature or served with the wrong people.” We all laugh and Riedel nods. “See, wine truly is a celebration.”

So how does a simple glass make a difference? Riedel says it’s because of our senses.  “Good tools never go out of fashion. If you have the right tools, it can help you explore your senses.” Riedel has revolutionized the industry by showing that people experience wine differently because of the way it hits your tongue and how it smells even before tasting it. Some wines, such as a pinot noir, are highly sensitive to the glass and can take on tastes from the glass.

As I joined the two men at the wine tasting, with close to a hundred wine lovers waiting to sample Gaja wines from the extraordinary hand-blown Riedel glasses, I kept thinking about the words of Gaja’s father. Yes, it is important to know how to drink wine. Gaja spoke to the group much like he’d spoken to me earlier–with enthusiasm and energy, and with a sense that it was important to learn about the past in order to appreciate the present. He again told the story of his beloved grandmother and the importance of knowing how to drink wine. He introduced the wines we tasted that night–a Gaja Gaia & Rey Chardonnay (served in a Sommelier line Montrachet glass); Gaja Barbaresco 2010, the winery’s signature single-estate wine (served in a Sommelier line Burgundy Grand Cru glass); and a Gaja Ca’Marcanda Camarcanda from Tuscany (served in a Sommelier line Bordeaux Grand Cru glass). Although he now also grows grapes in Tuscany, it is obvious when he speaks about his beloved Barbaresco that Gaja is partial to the wines from his native Piedmont.

Gaja introduced Riedel as the “Emperor of Glasses.” Everyone laughed and Riedel gave a dismissive hand wave, but Gaja turned to the audience. “I am only one of many producers of great wine, but Riedel is the only one who makes these glasses.”

Riedel emphasized them importance of being comfortable with your glasses. In fact, he suggested that entry-level wine drinkers might want to consider stemless glasses as a way to ease into the wine culture. Riedel reminded the audience that the goal is to have a wine experience–a celebration. He smiled as the room buzzed after tasting the first wine in a glass that accented the wine followed by a sip from the “wrong” glass that masked the beauty of the wine. “Good tools never go out of fashion,” he reminded us.

The future of wines and glasses

The one key ingredient that these men have in common is their drive and passion. If Gaja is correct about passion being the key to success (and I suspect he is), there is no wonder these two are at the top of their industries. Even though Gaja is now 73 and Riedel a decade younger, they both have big goals for the future. For Gaja, it’s all about creating more “elegant” wines. He wants to produce big wines that are perfect to match with food. As for Riedel, he wants to introduce his glasses to the top brands for coffee, tea, soda and water. He hopes to work with the best of the best in the world of non-alcoholic drinks to create the best glasses (Coca-Cola for soda, a fine espresso for coffee and Aqua Panna, Fiji or Evian for water). The world of designer water may never be the same again.

For more on Riedel Glasses, visit reidel.com. For more on Gaja Wines, which are available throughout the U.S., visit http://terlatowines.com/brands/italy/gaja.

To read the Luxe Beat Magazine version of this article click on the title Georg Riedel and Angelo Gaja-An Interview With Visionaries. 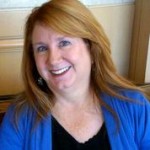 Susan Lanier-Graham is a freelance food, wine and travel journalist with more than 25 years' experience in the luxury travel industry. She is the owner of WanderWithWonder.com and has authored more than 75 books and hundreds of magazine articles. An accomplished speaker and writer, Susan travels the world looking for life's "wow" moments. She seeks out wonders whether they are around the world or across the street. Susan writes mainly for the luxury travel and lifestyles market, contributing to a variety of print and online publications and also works for a diverse set of corporate clients. Her work has appeared in such publications as AAA Highroads, AAA Home & Away, So Scottsdale, Go Gilbert, Phoenix Home & Garden, Colorado Homes & Lifestyles, Design & Architecture, View Highlife, Countryside and more. Her work is found online at such sites as Mapquest.com, Hotels.com, TravelandLeisure.com, Vacationist.com, Sofitel.com, Marriott.com, HotelIndigo.com, and at Aol Travel and Fox News Travel. She is also a frequent contributor to the Travel Planners Radio Show with markets throughout the US and in Europe.